For so many years I have longed for easier happier (and reasonably priced) dining in Paris.  Places where you could unwind while you ate and have, yes, FUN.  I am happy to say that a class of informal eateries is emerging in Paris and I enjoyed several on my recent trip.

The first is La Cantine Du Troquet Dupleix, chef Christian Ethcebest’s latest addition to his changing group of restaurants.  It is a casual room where the idea is to stay loose and eat his hearty basque influenced recipes in an informal atmosphere.  For visitors to the Yellow Flat apartment, this is a great addition to eating in the neighborhood, only 5 minutes walk.

Sizes of the portions vary, we started with an enormous charcuterie platter big enough to feed 4. Yet the cheese plate that I finished with in lieu of dessert was miniscule for 9 euro although the jam along side it was great. 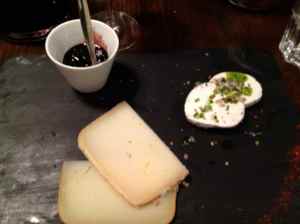 Along with the charcuterie we had a plate of crevettes on the plancha.  My eating mate Ron, a native of New Orleans and serious shrimp aficionado pronounced them brilliant.  They were exceptionally well spiced, reminding us of that famous gulf dish bbq shrimp, but without all of that butter.

Next up were the mains.  I ordered a wonderful Turbot (a european flatfish, part of the flounder family) in a rocking flavor forward spicy fresh tomato sauce with a lot of peppery olive oil that I sopped up after the fish was gone.  Best of they served it piping hot (a pet peeve of mine) skin on and cooked perfectly, the skin flaked off of the white firm meat with ease. 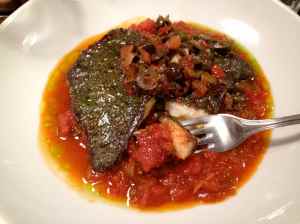 After checking with the waitress Ron ordered the scallops in a potato puree but without sauce.  Vegetarian alert here, always check the sauce in France when ordering fish, they can often use a meat stock.  I think they would have benefited from the sauce but were still good. 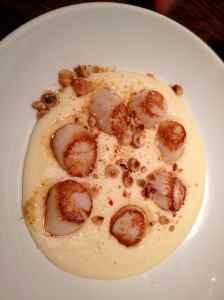 Dessert were so tasty my dinner partners would not share them with me while I enjoyed the cheese plate.  The simple homey gateaux basque was as always a favorite.    They served it with a fruit compote that is not pictured.

And the chocolate tart did not make it to my side of the table either.  Thanks Paolo.

I am a habitual sucker for a good deal and this time it did not workout well.   The restaurant serves full liters of red and white for around 20 euro  We had a Brouilly and then a Champingy and neither impressed.  I would go for a bottle next time and spend the money.  The flavors were dull.

While he has other establishments to oversee, the chef was there that night. He was a constant bundle of energy, overseeing the kitchen one moment and wiping down a table the next as only the owner would do.

Service was friendly, efficient and not overbearing.

Get there early, they do not take reservations and you can walk in before 8 and be seated.

By 9 pm the joint was jumping.  The place was loud.  People were having, yes, fun.

Total dinner for 3 with 2 liters of wine and several shots of calvados, 153 euro.  While not cheap certainly reasonable.

To reach the restaurant from the Yellow Flat, turn right on Rue Alassuer.  At the bakery on the corner turn left, you will walk past Park Dupleix and quickly reach Bd. De Grenelle where the metro runs.  Turn right and keep walking until you reach the corner where no. 53 is.  Remember, no reservations.